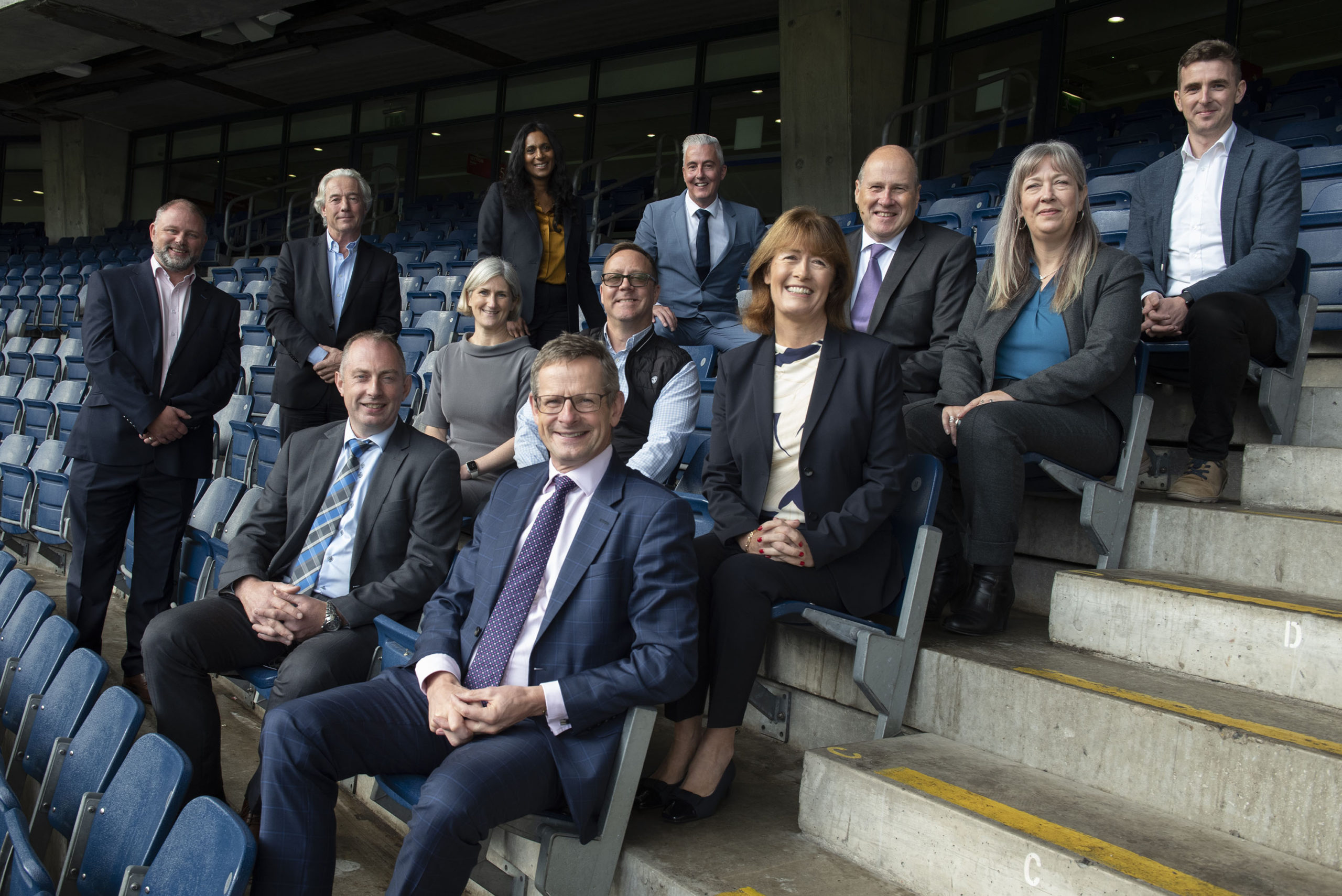 The construction industry has faced severe turbulence over the past 18 months yet despite this, optimism remains its foundation for future growth. A virtual gathering for the previous two years, the Construction Industry Federation’s (CIF) annual conference finally returned to an in-person event at a crucial time.

With Croke Park turning into a hive of activity on October 6, a packed schedule explored the theme of building a resilient industry. This was demonstrated with 30 exhibitors on display, a packed itinerary with varied talks and panel discussions, and great detail and analysis across many areas.

The many shocks and obstacles the industry has faced in recent years, let alone the last 18 months, has tested the industry significantly, but as the chair of the summit Ivan Yates, entrepreneur and broadcaster, said in his welcoming remarks, it’s “back to business for the CIF”.

The opening address by Frank Kelly, president of CIF, touched upon many of the issues that would shape the day, emphasising that the industry is central to Ireland’s economic strength and that for every €1million invested in construction, there’s €660,000 in added gross value as a result of it. 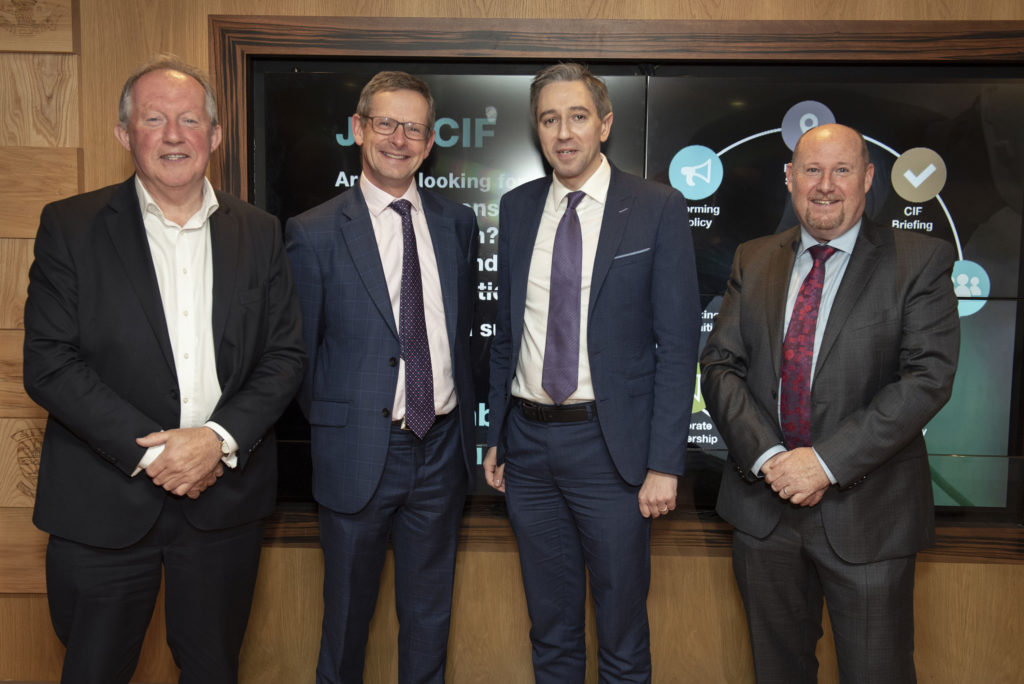 Shortly following Kelly was Simon Harris, the Minister for Further and Higher Education, Research Innovation and Science, who spoke positively about the discussions and chats with CIF that morning on education, apprenticeships and traineeships.

He used the occasion to announce three major developments: the approval of the new construction safety licensing bill, taking safe pass courses online next month, and the plans to publish a joint higher education initiative on housing and climate.

Further contextualising the current landscape was Danny O’Shea, managing director for Building Information Ireland, who analysed the economic and market outlook of the industry.

With the opening talks out of the way, the focus shifted to residential delivery. Kicking things off was a case study on accelerating housing delivery in the UK and the lessons Ireland can take from it, delivered by Pia Feeney, director, government & infrastructure, strategy and transactions for EY Ireland. 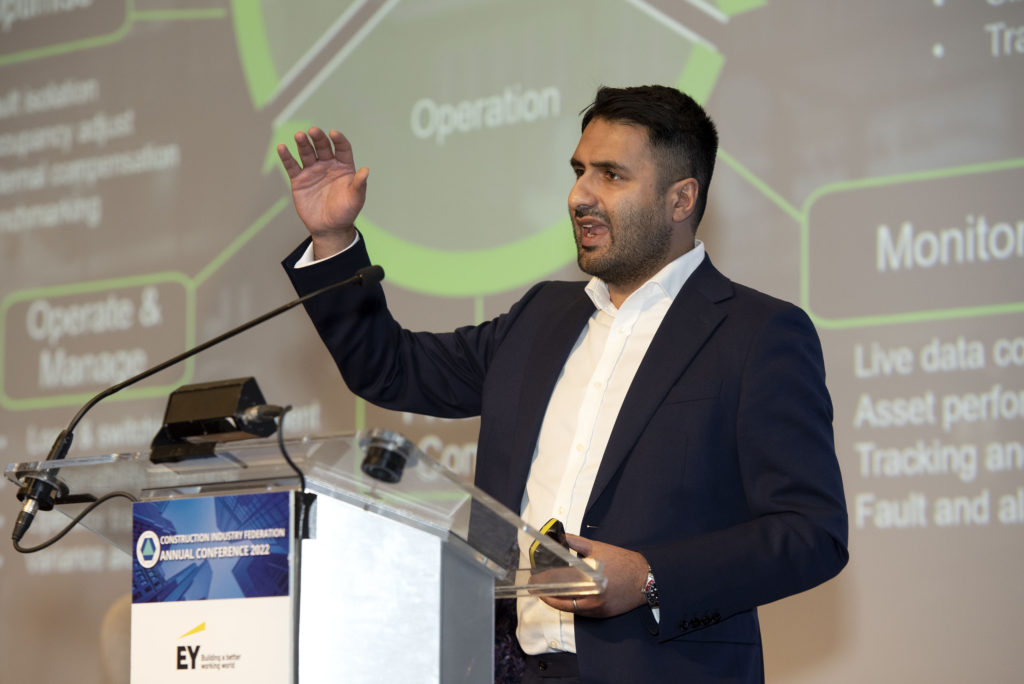 Collaboration was the key, with Feeney mentioning that the momentum in Ireland is more in its favour with stakeholders working together to achieve goals, citing the country’s stronger sense of community, younger population and its status in the EU.

With that information in mind, it moved nicely to the panel discussion on making these approaches viable. This included Feeney and Fiona Cormican, chief commercial officer for Clúid Housing, John Downey, director of Downey Planning, and Michael Kelleher, group operations
director of O’Flynn Group.

Encouragingly, Cormican mentioned that the departments of both housing and environment understand what’s required but cautioned against making reactionary policy changes.

“That’s the worst thing you can do to this industry,” she said. “We need stability; we need to know what happens. Every time a new policy comes out, everything stops and has to restart.” 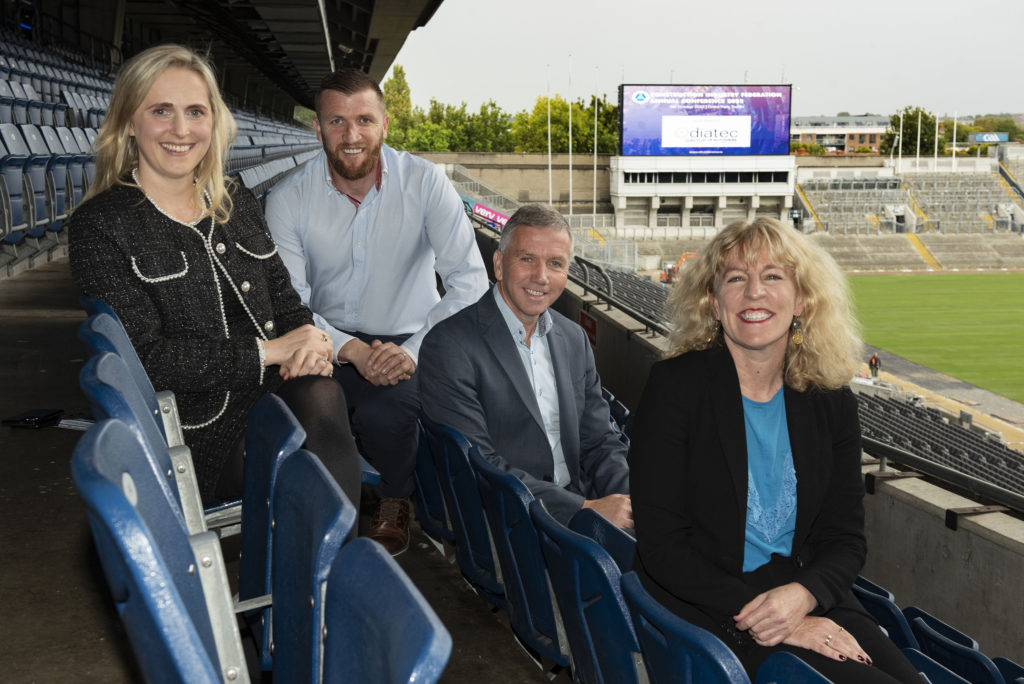 Downey mentioned that while rising prices were of concern, there are other areas of note like planning permission. The recent Downey Planning housing supply report found that between 2017 to 2021, only 21,000 out of 64,000 granted planning permissions in the Dublin area (41 per cent) were activated, which can harm progress. “That analysis from planning permissions is important because it defines housing policy and it defines where we will end up in ten years’ time,” he explained.

After the morning break, the conference moved on to the next major topic: delivering vital infrastructure via the National Development Plan.  Focusing on this topic was David Moloney, secretary general of the Department of Public Expenditure & Reform, Eoin Gillard, head of public transport investment at the National Transport Authority, Gus McCarthy, director for MKO – Planning & Environmental Consultants, and Niall Gleeson, chief executive of Irish Water.

Gleeson said that contractors and suppliers are working off margins which will be 3-5 per cent in a best case scenario. If the margins are low or non-existent, they’re not going to invest in delivering infrastructure which will bring the country forward.

“We have to understand they can’t absorb these costs,” he said. “When we talk about resources and getting extra staff and consultants, we need the supply chain to be able to look at the work in 10 years and make investments.” 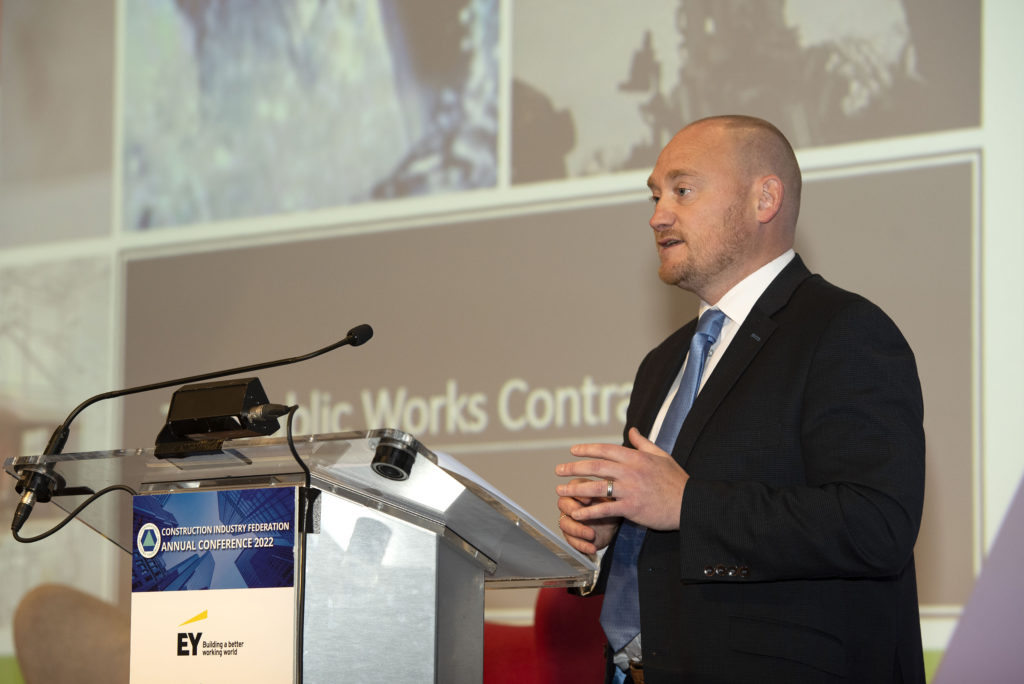 Following this was a series of talks and panel discussions on reforming procurement and the Public Works contract. An introduction to modernising procurement was delivered by Paul Sheridan, director of main contracting at CIF, who mentioned how many of the problems  repeated themselves in a situation reminiscent of Groundhog Day.

Next up was David O’Brien, construction advisor at the Office of Government Procurement, who spoke about the reforms his office is working on and the range of measures relating to the process itself.

Of particular interest was the ending of dispute management led nicely to the next talk concerning the challenges and opportunities surrounding cost reimbursable contracts. This was given attention by Tom Carey, chairperson for the Chartered Institute of Arbitrators (CIArb) and director advisory/ contract services for Turner & Townsend.

He stressed the importance of planning and collaboration from the beginning and knowing where you stand, stating: “If you can’t define the scope of your project, you shouldn’t be asking the market for a lump sum.” 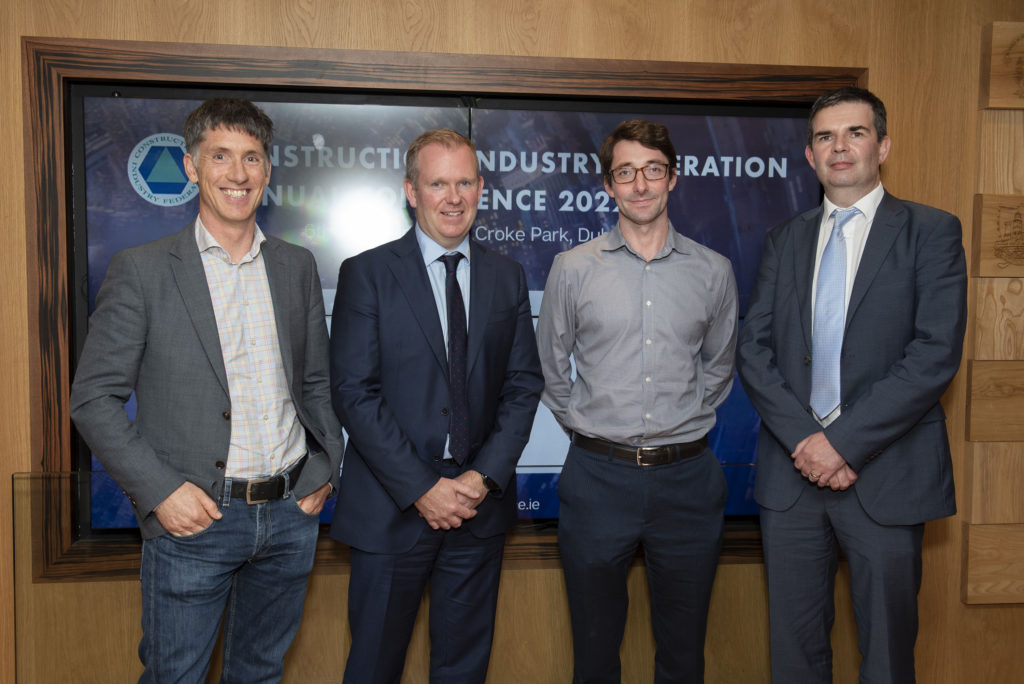 Citing the earlier panel discussion on residential delivery, Killorgan mentioned that moving to a collaborative form will bring greater success. “We can get that value by engaging early with our contractors,” she said. “If we can engage with our contractors and they can bring models that achieve efficiency, that’s how we’ll really achieve value for money.” 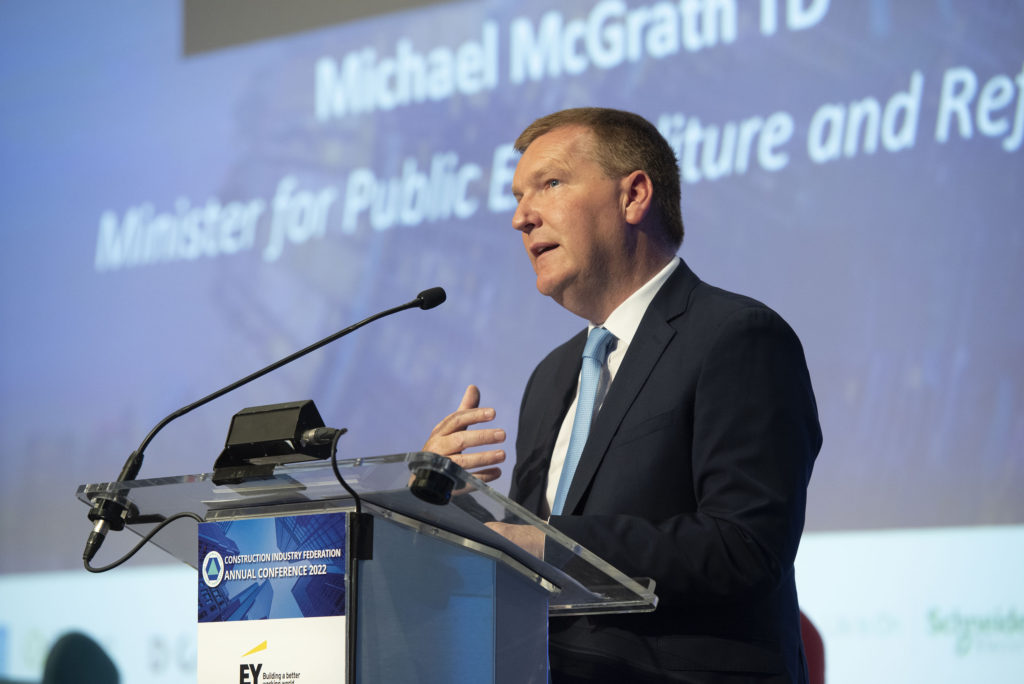 After lunch, the second ministerial address was delivered by Michael McGrath, the Minister for Public Expenditure and Reform. Elaborating on new and established topics, one of the areas he addressed was planning permission which he acknowledged as too complex and unwieldy with work being done to simplify the process.

The first afternoon panel focused on recruitment and apprenticeships in the construction sector, a topic of great interest as skill shortages are felt across the board. The panel featured John O’Shaughnessy, managing director for Clancy, Dr Mary- Liz Trant, director of the National Apprenticeship Office (NAO), Joanne Cluxton, HR director for Mercury and Derek Byrne, general manager of Way to Work Ireland.

Much of the discussion concerned apprenticeships and for Trant, there’s a significant shift happening to how they’re perceived and getting the message out that apprenticeships are a valid method of education towards a career. 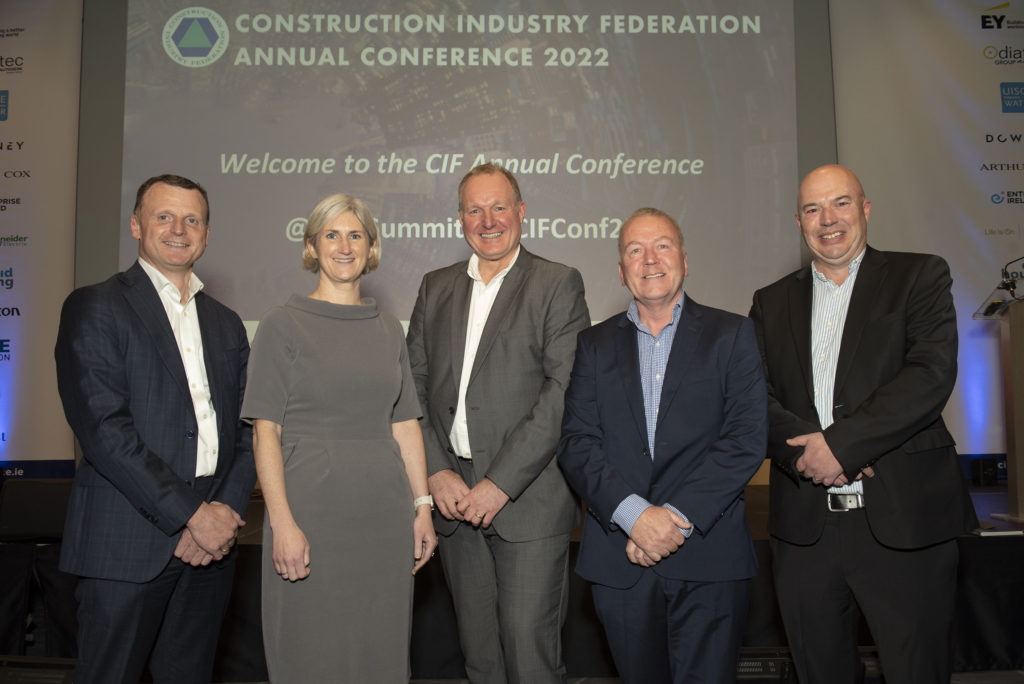 The final topic of the conference looked at creating a sustainable and digitally-enabled construction industry. This started off with a look at a  digital roadmap for the industry led by Jonathan Reinhardt, chartered architectural technologist at Diatec.

While touching upon many of the topics established throughout the day, he brought up the subject of fresh thinking on how we present buildings, specifically how vibrant streetscapes can affect people positively.

“The quality of design and construction in Ireland is extremely high; we need to take some fresh thinking in how we view building design here,” he said. “We need to start looking at introducing more varied streetscape designs in Ireland and get closer to it.” 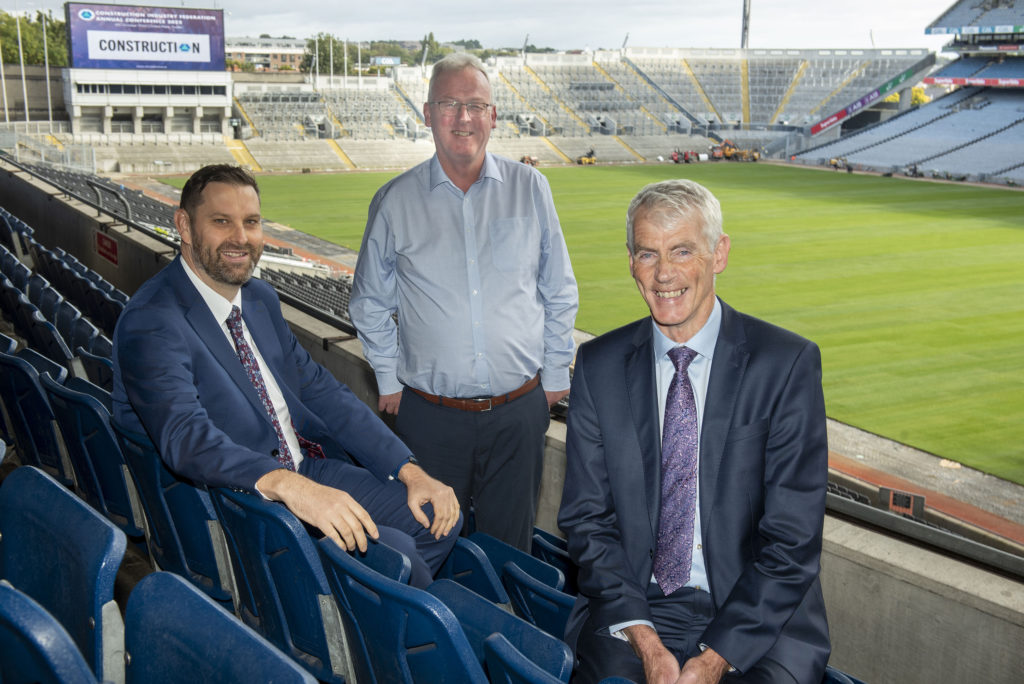 The next talk was on delivering smart, zero-carbon buildings and why it matters by Kas Mohammed, vice-president of digital energy and leading smart buildings at Schneider Electric UK and Ireland. One of the elements he hit upon was the power of digital twinning throughout the entire lifecycle of a building, not just in the construction phase.

“Digital twinning starts in the design phase, all the way through the operational phase and there doesn’t have to be different systems there,” he said. “There’s a work in practice to connect up the data and use the digital design element and take that through to the construction and operational phase and see how it’s operating and see how that building would behave under certain conditions.”

The day’s final panel looked at where the industry is now and where it’s heading in its journey to digital transformation. With Rob Fox, chief executive of Site Passport Supply Chain, Ross O’Colmain, manager, high tech and construction for Enterprise Ireland, Sean Downey, Director of Specialist Contracting, CIF, and Professor Jamie Goggins, director of the National Construction Technology Centre.

O’Colmain’s key message is that “digital transformation is for businesses of all sizes” and that the real work is to demystify these tools and services for the greater industry. Ending another packed conference was Tom Parlon, CIF Director General, who praised those in the industry for their resilience by saying: “Stay safe because resilience is about yourselves and the pressure you come under.