Gender pay gap must be the future focus for industry leaders 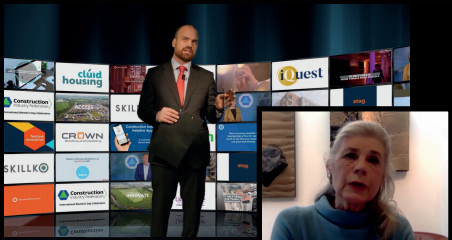 Over a thousand people tuned in to listen to a host of speakers – the majority of which were women – for the CIF’s 2021 International Women’s Day conference.

Entitled ‘Building Equality in Construction’ and proudly brandishing the theme of this year’s International Women’s Day event #choosetochallenge, Tara Flynn, director of Paul Flynn Construction and chairperson of CIF western region, opened the virtual celebration and conflab with a message that mixed wit with straight talking.

“Ladies you have to agree that every day is a man’s day,” Flynn said, before encouraging women to take the day for themselves and celebrate their “role in this brilliant industry.”

Female leaders, Flynn said, are empowering and inclusive adding that “most importantly in our industry we are straight talkers”.

One of the key focuses of this year’s event was mental health and empathy in the workplace, especially in a year that has been like no other in living memory.

CIF President Frank Kelly spoke of how the construction industry needs to do more to attract women to the industry, from what is still a low but growing base.

According to data released by the Central Statistics Office (CSO) in early 2020, women make up 8.5 per cent of the total workforce in the construction industry, rising from just 5.3 per cent in 2017.

And at management level women are still the outliers, with only 10 per cent of management positions occupied by women.

“So how do we achieve change?” Kelly asked.

It’s a perennial question, but Kelly countered that it should start at the origins of how gender differences are borne out, specifically in early stages of socialisation.

Kelly said we need to change the outmoded beliefs that construction is a gender trade off, and he also highlighted another false but prevalent belief, that the construction industry is not for the academically inclined.

CIF and SOLAS, the government agency charged with further education and training, are tackling these biases through campaigns and competitions and changing the perceptions of the construction industry, especially for girls and women while highlighting the immense possibilities of a career in the industry.

Sandi Rhys Jones, a veteran of engineering and construction and a champion for women in the industry told event moderator Shane Dempsey, CIF Director of Communications, that the theme of this year’s International Women’s Day – challenging – was something that resonated with people all over the world.

And, as she noted it’s a critical disparity that “we are still talking about”, and in her case it has been 25 years since she first started campaigning on this issue.

Rhys Jones said it was equally important that CIF made the gender pay gap a focus. One massive change that the pandemic has ushered in is work place flexibility.

“That has to be one of the silver linings,” Rhys Jones said, adding that remote working and flexible working is not something that works just for women, but also for men.

When asked by Dempsey how do we get more women into leadership roles the construction industry, Rhys Jones had a number of prescriptions.

Mentoring at senior level and visibility are of vital importance she said. “It’s also really important to know how to grow your own,” Rhys Jones said referring to finding the talent that already exists in every company.

She also highlighted “reverse mentoring” whereby young women mentors work with senior male managers so “that they understand what it’s like to walk in your shoes.”