What lies beneath: Heritage Board visits the Red Brick Building at Dublin Port 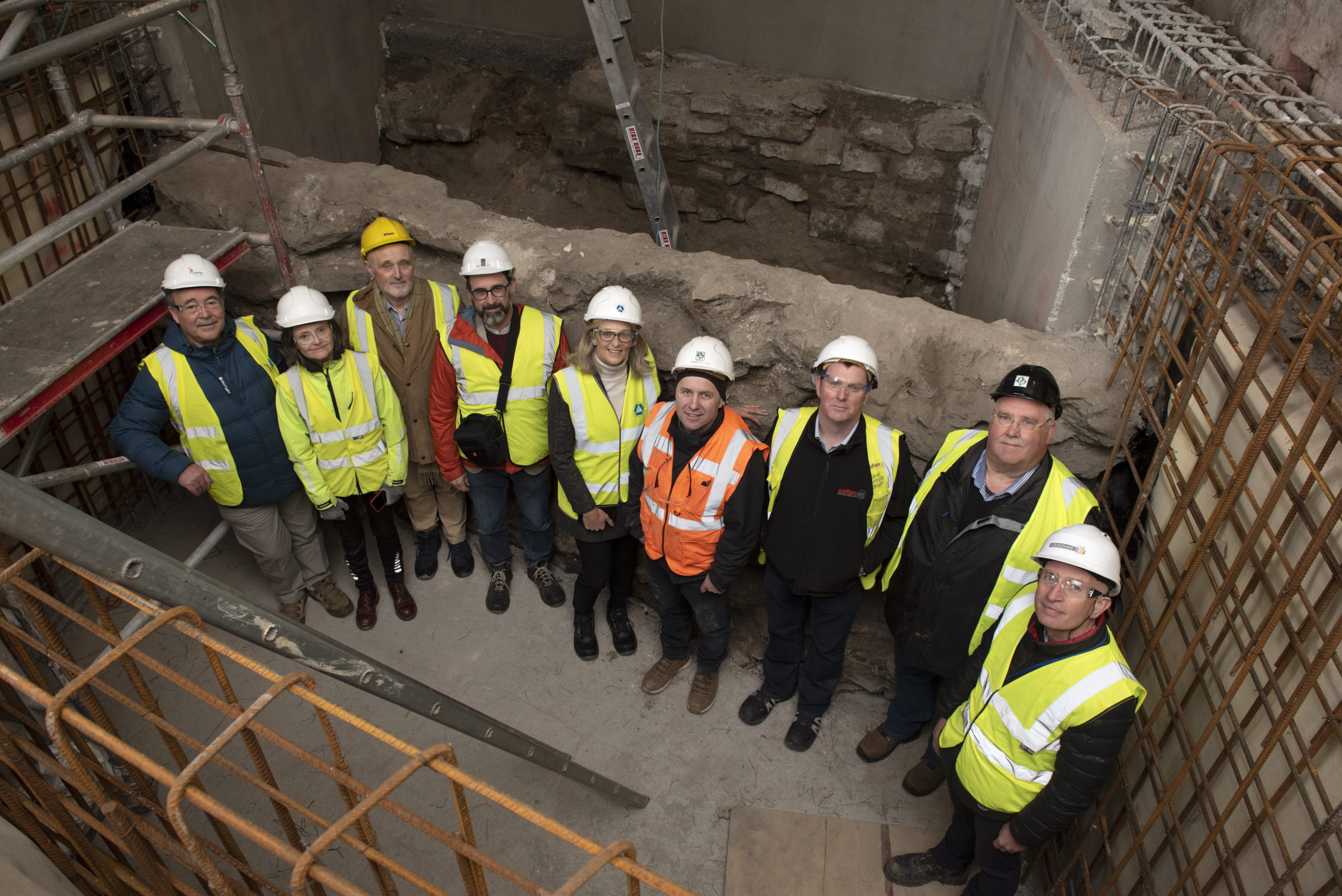 Located at the junction of East Wall and Alexandra Road and adjacent to the Dublin Port Company building, the Red Brick Building, formerly an electricity transformer substation, is one of the earliest industrial heritage buildings dating from c. 1922.

However it reveals as much underground as above ground, which Dunwoody and Dobson recently uncovered. The single-bay two-storey substation is built in red brick, laid in Flemish bond, and has an arched entrance door to the front with granite front step.

The main entrance is flanked by two circular windows bordered by brick surrounds and pivoting timber casement windows. On the North elevation, a half-arched window can be seen. 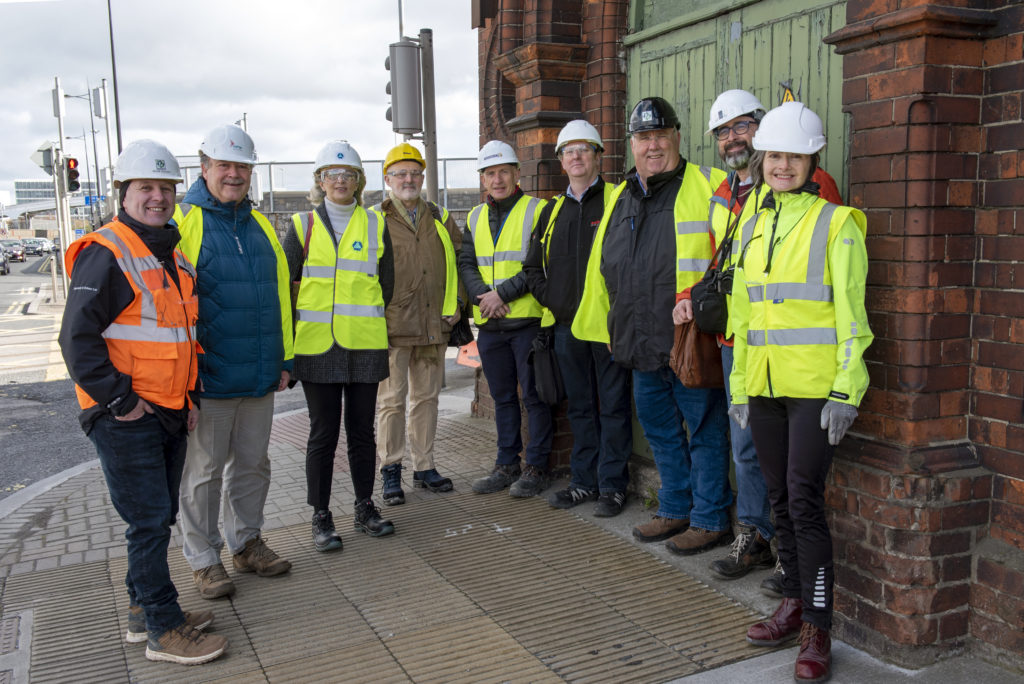 Members of the Hertitage Board. Photo: Maura Hickey

The Heritage Board which comprises stakeholders from the OPW, The Heritage Council, Irish Georgian Society, Department of Housing, Local Government and Heritage, Fingal County Council and the RIAI, is under the Chairmanship of Michael O’Sullivan; Dunwoody and Dobson Ltd, who are managing the project.

In collaboration with Dublin Port Company, they kindly granted permission to the Board to undertake a tour of the building following its recent historical discovery. Dublin Port who are committed to preserving port heritage added the  building to the list of protected structures in 2017 under the Dublin Port Masterplan 2040.

The Diving Bell and Crane 292 form some of the projects already completed, with further plans to integrate the city and the port and provide greater public access to heritage assets within the port to create a cultural hub at the former Odlums Flour Mill. 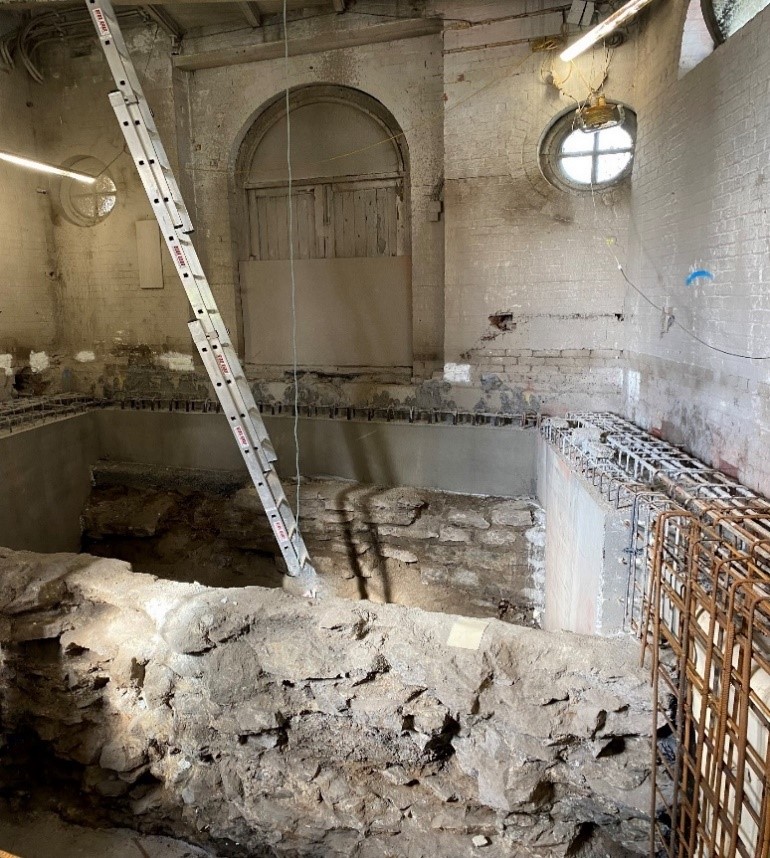 In the 18th Century, Dublin was, similar to Amsterdam, where land was reclaimed from the sea. Marine barricades and fortifications were built to safeguard Dublin city, and this was known as the sea wall and was thought to be in the location of the red brick building.

Dunwoody and Dobson were awarded the contract and commenced work in September 2021 and are working in close co-operation with the project team on this special restoration project.

The scope of work was to stabilise the red brick building, which was on the verge of collapse, locate and expose the sea wall and build a glass structure alongside which will become an orientation space for visitors.

Situated on the busy east wall road, it is not often that you can stop to admire such a building with lorries trundling along from the docks.

The building was in a precarious position with a major fissure on the southern elevation. This happened to be sitting on the sea wall, which held the wall in situ, while the crack transferred across the floor fracturing the raft and leading up the facing wall.

The roof gently pulled away from the westparapet but remained weathertight. It is a testament to the building that it has remained standing at all.

Dunwoody and Dobson uncovered the wall a few months into the project and as they progressed east, they discovered a further wall. It was slow and meticulous work with the archaeologist on hand to oversee the excavation. 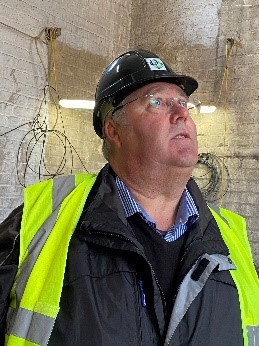 It is thought that the second wall was the sea batter wall, with sand fill of two metres and a parapet wall inside which would have led to the pathways beyond.

When the sea wall was cleared, they found that the Dublin kalp stone had been removed from the face. Further excavation to approximately 4.5 metres from finished floor level were completed and they started to get water.

They discovered stone on the flat which indicated that when they were reclaiming, they reused the kalp stone facing for other projects in the vicinity.

The scope of work in excavation was constantly under review and under the close supervision of the archologists and the design team, with finds such as pieces of pottery, clay pipes and shoe leather.

The refurbished building will be supported by a new internal steel framing support structure, with a glazed section of floor giving a view to the old sea wall structure below. 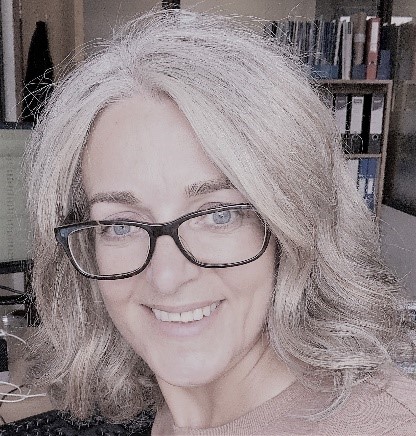 Registered Heritage Contractors are skilled companies that deliver the traditional building trades for the conservation and restoration of heritage properties or sites.

Heritage Contractors are assessed and approved for membership after submission of a detailed application form containing examples of heritage project signed off by a qualified professional.